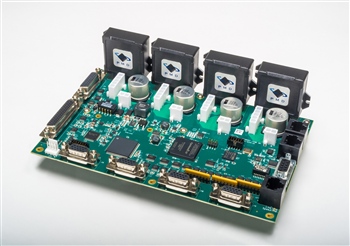 When a new design of compact blood analyser was being developed, a key challenge was to create an efficient and cost effective motion control architecture that could support multiple axes and multiple motor types while maintaining a table top format. The solution was provided by advanced motion cards and digital drives from Performance Motion Devices, which are available in the UK through INMOCO of Daventry.

The new analyser is a comprehensive all-in-one design, which includes an incubator station, sample and reagent holding station, pipette assembly, centrifuge, analysis station and transport assembly. Critical areas for control were identified as the centrifuge itself plus the transport assembly that carries containers between the incubator station, centrifuge and analysis station. There is also a motion control requirement for the pipette assembly which draws and dispenses samples, reagents and dilution fluids to produce solutions for testing.

All this calls for multiple axes of coordinated motion, including single-axis point-to-point operations, multi-axis point-to-point operations and velocity controlled rotation. For a compact and cost effective solution, the designers turned to PMD motion technology, using different motion card formats and digital drives to suit the needs of different parts of the machine.

PMD’s Prodigy motion cards are available in PC-104, PCI and standalone PCB configurations. Where compact size is the primary concern, a PC-104 format can reduce overall system size by using stacked motion cards mounted on the control system mother board. On the other hand, if a more distributed architecture is needed, a standalone format (with or without on-board amplifiers) can be used to mount the motion card within the various subsystems.

The blood analyser was well suited to individual cards and digital drives. The PMD Prodigy Machine Controller motion card was selected for the 2- and 3-axis arms in the sample storage carousel and incubator. Prodigy motion cards combine up to four amplifiers and a positioning controller on a single PCB, providing convenience and space saving as well as reduced assembly costs. The card controls the torque, velocity and position of a number of different motor types, including DC brushed, brushless and stepper motors.

The same card was used to meet the needs of the various transport systems throughout the machine, again enabling a high degree of flexibility in the design of different models of the unit. Further, the multi-motor support means that the designers could optimise motor selection in the system for both cost and performance.

For example, stepper motors were used in the 2- and 3-axis arms in the storage carousel, while brushless DC motors were fitted in the incubator. Motion functions for the handling of liquid and pump controls were incorporated in the design.

In the centrifuge the ION digital drives operate in velocity profile mode with time break points. Using the velocity profile mode the centrifuge can be set up to run at various velocities at predetermined time points that match the specific process to achieve variable speed control and the resulting relative centrifugal force (RCF). In this mode the motion is controlled by changing the acceleration, velocity, and deceleration parameters while the profile is being executed.

Motion control programming for the Prodigy motion cards and ION digital drive was simplified through the use of PMD’s C-Motion development suite, which includes an extensive library of proven motion control code as well as an array of development and debug tools. The powerful C-Motion command set reduced the development time for the C/C+ programs running the on-board host.