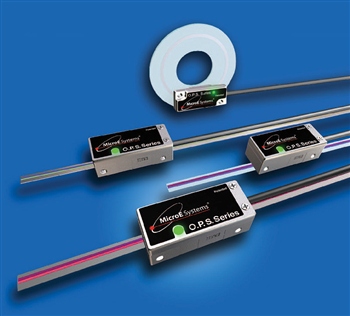 The MicroE Systems OPS range of encoders, available in the UK through Inmoco of Daventry, has been extended with the addition of a side mount sensor and new Performance and Value linear glass scales, which enables OPS to be used in applications requiring higher accuracies.

The side mount sensor is easily installed and can be used with a FlexFit Adaptor to mount directly into several industry-standard mounting hole patterns. This extends the range of possible applications in which the OPS can be used.

The Performance and Value OPS encoder system is designed for applications where total cost of ownership is a design priority, yet advanced encoder system performance is required. Optical limits can be configured to reduce wiring, footprint, and system complexity.

OPS works with MicroE’s PurePrecision™ linear tape scales and a wide range of linear and rotary glass scales to achieve the right price-performance needed in your application. To ensure the easiest possible installation both the tape scales and the PVGL scales are mounted using adhesive backing, which is supplied as the standard option.

The performance of the OPS units is enhanced with built-in interpolation, low cyclic errors, and jitter and low power consumption. Aware that installation is a key issue for many potential users, Inmoco highlights the OPS’s wide alignment tolerance, the 100 percent optical index and limits that reduce cabling and footprint requirements, the flexibility in mounting configurations and the fact that the same senor is used whether the scale is tape or glass. OPS even has a simple but useful LED in the sensor, which indicates both correct alignment and system health.