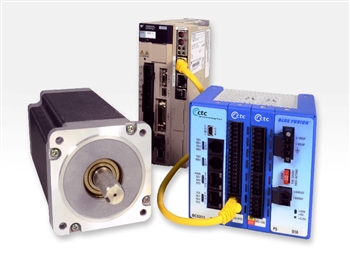 INMOCO is to introduce an EtherCAT master module for use with the CTC 5300 Blue Fusion controller.

The module, model M3-41A, enables high-performance control of networked servos, stepping motors and I/O devices. It can coexist within control systems that also include Modbus, DeviceNet and BACnet interfaces, allowing multi-vendor configurations with the CTC system acting as a protocol bridge as well as a control system.

CTC has integrated EtherCAT into the programming environment, by pre-engineering support for the most popular EtherCAT slave devices. Using an auto-discovery function, the control system is able to determine what specific devices are on the EtherCAT network and configure the master to communicate with them automatically. This eliminates the time-consuming and potentially error-prone step of having to use a configurator to manually set up the network.

Further, EtherCAT-based drives and I/O points then appear in the programming environment along with any other drives and I/O in the system. These are programmed as local devices. The result is that users can freely and transparently mix local and remote servos and I/O, or change a device from local to remote without extensive programming changes.

EtherCAT is unusual in that it does not introduce a need for signal process time. Instead, Ethernet frames are processed on the fly at each slave device. A portion of each frame is dedicated to the slave device; an FMMU (fieldbus memory management unit) identifies this portion and substitutes new locally generated data as the packet is transmitted. In fact, there is a delay of a few nanoseconds, but this is compared with the tens or hundreds of milliseconds typically required.

Therefore, the update time for 1,000 distributed I/O points can be as low as 30 µs, with control of nearly 12,000 I/O points possible with a single frame.

EtherCAT supports various topologies including line, star and ring topologies, and there is no limitation on the number of nodes you can connect. It also supports synchronisation by making use of high-resolution distributed clocks to greatly improve the accuracy of velocity calculations.