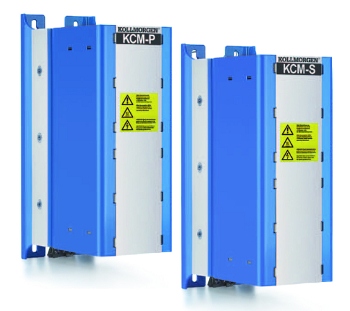 The KCM-S model saves energy by charging up during regenerative braking, and then provides a boost for subsequent accelerations to improve efficiency. The KCM-P provides a power failure ride-through, releasing stored energy in the event of a power supply failure so that the drive slows down in a controlled manner, and the KCM-E expansion module is an add-on storage module used with either the KCM-S or KCM-P to extend their capacity.

These devices are additional to INMOCO’s comprehensive range of servo and precision motion equipment, and enable the design and build of robust systems that can cope with interruptions to the power supply. In the event of a short term power failure, KCMs will maintain the DC link voltage, thus reducing the risk of uncontrolled outages and damage to the drives, machine and products. The KCMs are in effect mini UPSs (uninterruptible power supplies) for the drive.

KCMs are easy to install and work automatically, in many cases representing a cost effective and elegant alternative to high-maintenance mechanical inertia storage systems. Further, unlike more complex regenerative solutions they do not have a disturbing influence on the mains. Instead they charge up their energy storage capacitors during normal servo amp operations, doing so in highly metered doses (under braking in the re-gen version) so as not to disrupt normal operations.

In effect KCMs provide short-term buffering of energy which reduces peaks and troughs in the power supply. This reduces peak currents during acceleration and also cuts overall power consumption, since energy generated during braking is captured rather than dissipated as heat in resistor banks.

Benefits achieved through the incorporation of KCM units in servo systems include: securing productivity during short-term power failures; rapid and automatic machine restarts; easy system integration with a two-cable connection to the DC-link; instant commissioning with no need for alignment or tuning; smooth capacitor charging which doesn‘t put strain the servo amp or generate feedback; cascadable expansion modules to very large capacities.

INMOCO not only supplies servo components, but also builds sub-assemblies and systems to order and provides testing and calibration services. As with many of its retailed products the new power storage modules will be used for system builds and offered for sale, being of particular interest in situations where the mains supply is liable to fluctuations.